Received messages are automatically sent to the main box or to the box reserved for general things. Thus, the conversation is highlighted in the message list and issued a notification for a new memo.

In addition to the request box, Instagram Direct organizes recent messages in the “Main” box and other subjects, such as chats from business profiles and past conversations on the “General” tab.

Next, learn how to view message requests on Instagram. To test this feature, we are using an updated iPhone 7 with iOS 13 system. However, the tutorial steps also work for Android devices. 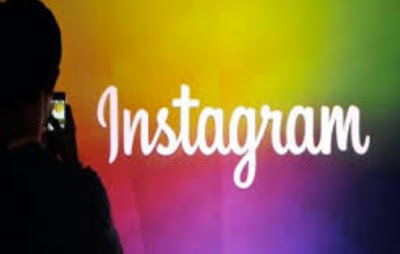 Open Instagram and tap on the arrow icon at the top right corner of the screen. Then, tap the "Request" option.

This box allows you to use filters to filter messages. To do this, click on the gear cone on the page. Then select to see "Top requests" and "All messages".

Tap a message to view the content. Press the "Accept" button to send the message to the main box direct.

Choose whether to send messages to the “Main” or “General” box.

Step 5. To view the message and continue the conversation, access the tab where you sent the chat and tap on the description.

That's how you can easily see message requests on Instagram by following our guide above, good luck !.

By Admin Monday, 7 September 2020
Instagram brings QR codes to the app. Thanks to this feature, users can now generate QR codes that can be scanned from all third-party camera apps that support it.

Instagram first launched QR Codes in Japan last year. The idea is that businesses can print QR codes and have customers scan them to easily open their Instagram accounts.

From there, people can view store hours, buy goods, or simply follow an account. To make a QR code, open the settings menu on your profile and tap QR code. 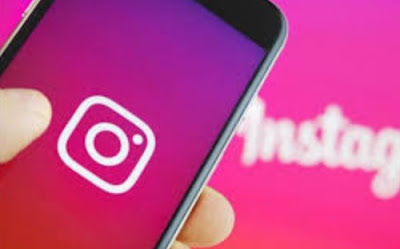 You may still see the Nametag there. But, in the end, the nametag will turn into a QR code. You can then save or share the image,

Instagram previously implemented a similar system called Nametags, which are internal QR-like codes that can only be scanned from an Instagram camera. Now, this feature is completely discontinued.

Several other apps use their own QR-like system, including Twitter, Facebook, Snapchat, and Spotify. But, given the pandemic, it's no surprise to see Instagram embracing a more open QR system.

Restaurants are starting to abandon QR codes instead of their physical menus. Then another business asks people to scan a QR code to load their website. While Nametags serve this purpose, QR codes make it easier for people to scan and make them less dependent on getting their Instagram cameras out of the way to access information.

By Admin Wednesday, 19 August 2020
More than a year ago, Facebook announced its plan to combine chat on Instagram, WhatsApp and Messenger into one application. And the first signs of this effort are visible in the update impacting Direct Messages (DM) on Instagram.

Citing GSM Arena, users of the iOS and Android versions of Instagram in the United States have reportedly received an update informing them that they can send messages to colleagues on Facebook via the Instagram application, even though they do not have an Instagram account.

This update also makes DM more colorful, in line with the aesthetics currently carried by chat on Messenger. Apart from that, the icon in the top right corner of the Instagram app has also reportedly been replaced by the Messenger logo. 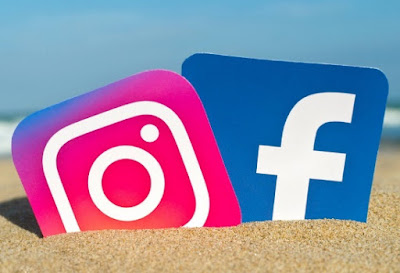 Meanwhile, Instagram has announced that the company will introduce a feature called Reels, which allows users to record and edit 15-second video clips with new audio, effects and creative tools.

The presence of this feature is clearly intended to compete with TikTok, a social media platform that is on the rise and is available in 50 countries. Instagram Reels can now be found on Instagram Camera. This feature represented by a button in the upper left corner of the screen is accompanied by a user interface with a new design.

Instagram also brings a variety of tools for editing, including audio additions, AR Effects, Timer and Countdown to support the dance the user wants to use. Instagram will also soon allow users in the United States, United Kingdom, and Ireland to raise funds for things they specify

Instagram launched this feature as part of initial testing on Android, followed by iOS. Previously, this fundraising feature was available for Facebook users. To create a personal fundraiser on Instagram, users need to edit their profile and tap on Add Fundraiser, then select Raise Money.

By Admin Wednesday, 19 August 2020
Instagram has finally launched a new feature called Reels. This feature is prepared to compete with TikTok. So, to find out more about this feature, here we will share how to use Instagram Reels.

It may look similar to the Instagram Stories feature but there are actually many differences between the two. What do you think? 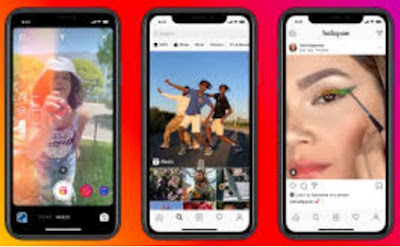 Reels offers a wide variety of editing tools, including AR effects, speed control to speed up or slow down audio and video, and the ability to align multiple clips for smoother transitions.

Reels can be shared to the Instagram feed, so people who don't follow you can see them too. If you include the original audio that you created, your audio will be associated with yours, and other users can put it in their own Reels.

Basically, Reels is a lot like TikTok, only rebuilt within Instagram. It's not that different from when Instagram launched Stories, which basically duplicates a lot of Snapchat's functionality.

To open the Reels feature, open the camera in the Instagram application like you would use Stories. Select Reels in the feature options section below.

You will find editing tools on the left side of the screen. Use the record button to create a video clip or series of video clips at once.

The bar at the top of the screen will show you how many 15-second videos you've created. Tap the arrow at the bottom when your video is ready to publish.

Then you have the option to add text, choose a cover image, add hashtags, and share your video on Reels. Reels will appear on the Explore page and stored in the tabs on your profile page. Similar to content from IGTV.

You can also create Reels and send them via DMs or upload them to Stories. Both videos will disappear after 24 hours. To watch Reels from Explore, Instagram users will be faced with a vertical feed that has been tailored to the user's interests and interests.

The new reels will be available in key market countries, such as the United States, India, Brazil, France, Germany, UK, Japan, Australia, Spain, Mexico, Argentina and several other countries.

The reason Reels is only present in 50 countries is because Instagram already has the rights to music labels in that country, so the company can add music effects without worrying about copyright issues.

How To Do Reels || How To Use Reels In Instagram

By Admin Friday, 14 August 2020
Comic panel filter - If you are looking for information on how to get a comic panel filter on Tiktok, well here we will discuss it for you how to get it. Where lately it's been viral, social media users, especially TikTok, share their videos with a cartoon effect display.

In today's guide, we will provide information about the Tiktok filter, namely the Comic panel filter. The display with cartoon effects is currently viral and has been widely uploaded on social media such as Tiktok and Instagram. Just go to the tutorial, here are the steps to get a comic panel filter on Tiktok. 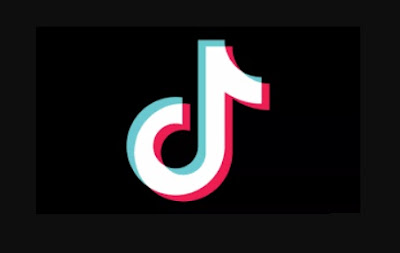 How to Get Comic Filter on Tiktok and Instagram 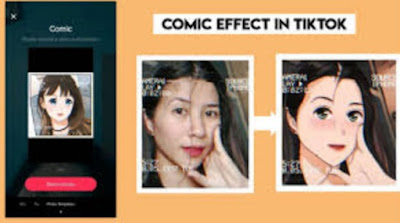 Launch the Tiktok App on your device.
Once there, you switch home to the search bar.
Type 'Comic panel filter' in the Tiktok search box.
After finding the Comic filter panel, then you can make a video then start by sharing it via Tiktok.

That is our discussion on this occasion, which is about the Comic filter panel on Tiktok. Hopefully this short tutorial will be of use to you. Good luck!

Before you want to use Disney filters on Tiktok, you must have an Instagram account first. Yes, because Disney this filter is only available on Instagram. 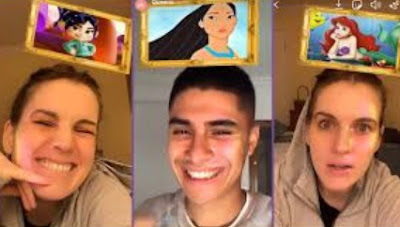 Once you've found the Disney filter, you can immediately use it by clicking record and aiming the face at the camera. Then later on above your head a column will appear, in that column what Disney character will suit you.

Then, please click save the recording. So, you can upload the recording with the Disney filter that you have saved to your Tiktok account.

Well, that's how to get the disney filter on tiktok, hopefully our short tutorial on how to use Disney filters on Tiktok can add to your experience on Tiktok.

By Admin Wednesday, 12 August 2020
Thanks to the new Instagram Reels feature, Zuckerberg is getting richer, now a "centibillionaire" equal to Bill Gates & Jeff Bezos

And, for the first time, the Facebook CEO's net worth exceeds US $ 100 billion (around Rp.1,460 trillion). As a result, Zuckerberg officially holds the title as a centibillionaire, along with Jeff Bezos and Bill Gates.

For information, centibillionaires is a term for people whose wealth is more than 100 billion US dollars. Jeff Bezos is still in the first rank of the richest people in the technology industry with a net worth of US $ 113 billion or around Rp. 1,834 trillion. Bill Gates is in second place with a fortune of 98 billion US dollars (Rp.1,600 trillion). 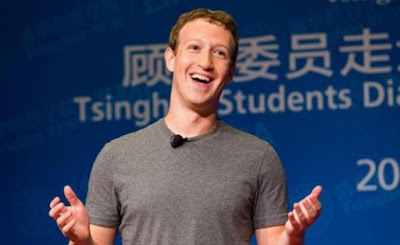 Even though 2020 is not yet even, Zuckerberg's wealth has increased by 22 billion US dollars (Rp 323 trillion). Most of the 36-year-old's wealth is known to come from 13 percent of Facebook shares.

According to the Bloomberg Billionaires Index, the soaring wealth of Zuckerberg has always been influenced by the increase in share value experienced by Facebook. The value of the shares of the company from Monte Carlo, California, USA skyrocketed shortly after the launch of Instagram Reels, a video feature that was predicted as a competitor to TikTok.

Reels itself is not an application, but a new feature embedded in the Instagram Camera. With Reels, users can create short 15-second videos accompanied by various music, effects, and video speed levels directly from the camera feature in the Instagram application.

Although similar to TikTok, Instagram Product Director Robby Stein claims that Reels is different from the app made by ByteDance. He admits that TikTok is the first pioneering application to popularize short video content.

By Admin Sunday, 9 August 2020
Google will no longer automatically place photos and videos from social media platforms into the Google Photo service. 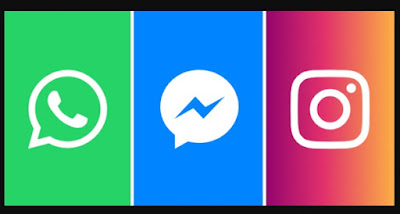 This change was intended to save internet resources because people shared more photos and videos during the Covid-19 pandemic.

Google Photos feature itself uses internet broadband and takes up memory on the device.

Earlier this year, YouTube and Netflix took a similar step, which was to reduce the quality of streaming video.

The goal is the same, reducing internet density. Because, when a pandemic, more people use internet services at home.

XDA Developer said, a number of applications affected by Google's decision to no longer synchronize Google Photos to social media, include:

Google Stop Features Automatically Save Photos From Instagram and WhatsApp